California condors #167 and #190, sit together on a cliff in Big Sur. Photo Credit: Tim Huntington, Webnectar.com

Ten years ago this month, a group of biologists from the Ventana Wildlife Society and their partners searched for a mated pair of California condors in the forested canyons of Monterey County, California. Using radio telemetry, satellite signals and a few days of bushwhacking through poison oak and stinging nettles, they tracked the tagged birds to a remote canyon.

The male had been released in Big Sur by the Society in December 1997 and the female in January 1999.

At the time, condors had not been found nesting anywhere in coastal redwood forests, rather than in the Giant Sequoias or cliff-side rock caves they typically choose.

And the last known condor nest in Monterey County, or anywhere else in Northern California, was recorded on April 12, 1905, when collectors gathered an egg for the Western Foundation for Vertebrate Zoology.

U.S. Fish and Wildlife Service biologist Joseph Brandt, then a young field biologist with the Ventana Wildlife Society, had spent three days in the woods tracking the birds before spotting what appeared a likely nesting tree.

His diligence and patience paid off, and he was the first to spot the condors’ nest.

“…with his camera and binoculars, he waited. Brandt was equipped for an overnight stay in the woods, but before lunch, he saw the male condor -- a 9-year-old born at the Los Angeles Zoo and released into the wild in 1997 -- fly out of the nest, light on a nearby branch, then promptly return to the hollow.”

"I was thinking the nest would be much higher in the tree, but then the male kind of hops out, where I could see him," Brandt said. "It was like, ‘Oh my, gosh, this is what we've been waiting for,’ and your heart just kind of jumps right up into your throat."

This is the original photograph of condor #190 poking her
head out of the nest in a burnt out Big Sur redwood tree taken
by biologist Joseph Brandt in March 2006.
Photo Credit: Joseph Brandt/USFWS

When the team finally located the birds – a male wearing tag No.167 and a female with tag No. 190 – in a hollowed out redwood tree 40-feet off the ground, it was the first time in more than a century that the majestic California condor had been spotted nesting that far north.

Looking back on that day, Brandt, who is now the senior condor biologist with the U.S Fish and Wildlife Service, says that the sighting was a significant milestone in the recovery of the endangered bird.

“I still feel the chill when I remember seeing one of the condor parents poke their head out of the nest cavity,” he says. “Ten years later, it’s encouraging knowing that the pair is still together and nesting.”

Today, the pair seems to have carved out a successful life in the coastal redwoods of Big Sur, raising offspring and increasing their numbers a little year by year.

Kelly Sorenson, the executive director of the Ventana Wildlife Society, was also a member of original team that day in 2006.

As the director of an environmental organization that has successfully recovered a breeding population of bald eagles in central California and is doing the same for California Condors, he has monitored this pair of condors closely over the past ten years.

“The significance of being ‘Northern California's first documented condor nesting site in 101 years’ is important, but more so is that they are still alive and doing well," he says. “We’ve tested them for lead toxicity probably a dozen times each over the past ten years and they both have consistently shown low lead levels,” he explains. ““Surprisingly, they are great parents. If their egg makes it, the chick usually makes it.”

Kingpin, #167, is frequently spotted landing to investigate a potential meal or hanging out along the central California coast. Photo Credit: Tim Huntington, Webnectar.com

The pair has made eight nesting attempts in the same nest tree since 2006 and successfully raised four chicks to fledging age and all are still alive today. Two of these were biological chicks hatched and raised in the wild and the other two were chicks hatched in captivity and foster-raised in the nest.

Redwood Queen, #190, checks in on her fluffy chick recently in their redwood cavity home in Big Sur. Photo by Tim Huntington, Webnectar.com

But it hasn’t always been so sanguine for the pair. The eggs laid by condor #190 have not always been viable. Her first egg laid in 2006 had a shell that was too thin and it failed.

In later nesting periods, when eggs failed, they were replaced by fake eggs and eventually, captive-laid eggs that were “pipped” – eggs beginning to hatch – were placed in the nest for the condor parents to foster.

Analysis of failed egg shells prompted biologists to consider pesticides as a possible cause, specifically the long-banned DDT.

“We remain concerned about the remnant levels of DDT in the marine food web,” says Sorenson. “Sea lions and other marine mammals are a significant part of these condors diet and we are well aware that the Channel Islands, where a large number of sea lions live, is known for high levels of remnant DDT.”

And so, the possible link between the condors and DDT led the biologists to take a closer look.

“When this first nest failed, we were able to collect a small amount of eggshell from the nest and found it to be much thinner than a normal condor egg shell,” Brandt says. “This prompted a study of condor eggshells led by the Ventana Wildlife Society and USFWS that compared the egg shell thickness of these coastal foraging condors, who regularly feed on sea lions, to condors in Southern California that do not feed on marine mammals.”

“The structure of the thinned egg shells also provided us with some insight as to what may be causing the thinning,” he explained. “Many marine mammals, especially California sea lions, which make up the largest portion of marine carrion that condors feed on, are still heavily contaminated with DDE, the result of the pesticide DDT that metabolizes during digestion by an animal.”

“We believe this is likely the primary cause of the eggshell thinning. We are currently examining changes in the last five years and are looking more closely at the cause,” says Ventana Wildlife Society’s Joe Burnett, who is leading the current research on eggshell thinning in condor eggs.

“Identifying this as a threat for condors was a huge first step in learning what could be done to resolve the issue,” Brandt says. “It also provided an insight into yet another threat that condors faced in the past and now the present.

Seven condors from the Big Sur flock in a tree along the central
California coast. Photo Credit: Tim Huntington, Webnectar.com

This leads Sorenson and others to consider prioritizing the various threats condors face based where they live.

“Coastal condors have significant lower lead toxicity than those foraging inland,” he says. “And even the levels of lead seems to be reducing as hunters and ranchers switch to non-lead ammunition.”

At this point, the pair are doing well, as are their offspring. While their fledglings have not reached the age of maturity for breeding, they are socializing with other birds and are often seen with the same condors while foraging.

As condors can live more than 50 years, the common hope is that this pair will continue to breed in Big Sur for another couple of decades and continue contributing to the condor’s recovery.

But both Brandt and Sorenson agree that while these birds and the others in the Big Sur flock are doing well, there’s more work to be done. “

Knowing first hand that condors still face the threat of lead poisoning, the fact that these two birds have remained together and continue to produce offspring is certainly a sign of progress for the recovery of the California condor,” Brandt said.

“We are hopeful about their future because they are thriving, but if there is one thing we can do to help secure their survival, its remove lead from their environment through the use of copper or non-lead ammunition,“ Sorenson added.

Kingpin coming in for a landing near a sea lion carcass. Photo credit: Tim Huntington, Webnectar.com

PARTING SHOT: Kingpin (right) and another condor from the flock hangout  in a tree in Monterey County, Calif., at  Big Sur in October 2013. Photo credit: Tim Huntington, Webnectar.com

Jon Myatt is the Digital Communications Manager for the Pacific Southwest Region, headquartered in Sacramento, California. 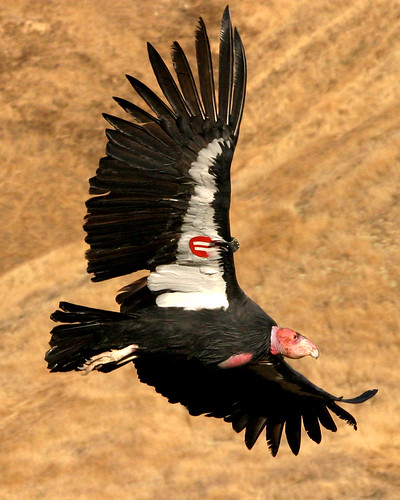 Working together to save the condor.
Special thanks to Mountain Vista Elementary School, Fillmore Middle School, the City of Fillmore, the City of Ventura and the Santa Barbara Zoo. Additional Condor footage provided by Jeff McLoughlin and Good Eye Films.
Produced for the U.S. Fish & Wildlife Service by Tandem Stills + Motion, Inc.