What began as a tool for wildlife biologists to collect critical data on one of the world’s rarest birds has evolved into a full-fledged, multi-disciplinary environmental learning experience for hundreds of kids. And state educators are taking note of its success.

The U.S. Fish and Wildlife Service and Santa Barbara Zoo released the latest component of the CondorKids environmental education program this January, debuting a 27-lesson plan curriculum to third grade teachers, which is free and available for download by educators worldwide. Just two months after its release, the program has already received accolades as a winner of California’s Superintendents Awards for Excellence in Museum Education.

The curriculum release comes after a two-year pilot testing phase with students in Fillmore, California, which integrated a live-streaming video feed of nesting California condors as well as field excursions to see condors in the wild into teachings about math, science and technology.

“California condors nest in extremely remote and high inaccessible areas. We needed a way to monitor the health of condor parents and their chicks in the wild, without always physically repelling up and down cliffs to access each site,” explains U.S. Fish and Wildlife Service biologist Joseph Brandt, who coordinates on-the-ground recovery efforts for the endangered species in southern California. In Ventura County, California condors nest in cliffside crevices of Hopper Mountain National Wildlife Refuge, a wildlife preserve dedicated to providing important habitat for the federally endangered California condor.

A California condor sits next to its 30-day old chick in a nest cave near Hopper Mountain NWR in 2008. To bring condors into the classroom, the team installed video cameras in a condor nest like this one.Photo Credit: Joseph Brandt/USFWS

“So, we decided to install video cameras into the nests to monitor the parents during the breeding season, egg incubation activities, and the behavior of the chicks themselves,” Brandt said. “Eventually, we started to post some of the clips on a Facebook page called The Condor Cave, and we received an overwhelmingly positive reaction from the online community. They loved seeing the birds in the nest up close, especially their quirky behaviors, from stretching out their growing wings to feeding interactions when their parents returned to the nest after days of foraging.”

In the fall of 2015, with the support of livestreaming network technology provided by Cornell Lab of Ornithology, biologists were able to launch a livestream feed to one of the video cameras, connecting worldwide audiences with a live, wild, California condor nest in real time. Biologists unveiled the livestream feed at Mountain Vista Middle School in Fillmore to an auditorium-filled audience of children, parents, teachers, wildlife biologists, and community members who contributed to development of the CondorKids education program.

Michael Brady manages the Hopper Mountain National Wildlife Refuge, which spans more than 2,300 acres adjacent to the small, rural community of Fillmore. "Many of these communities have California condors soar above them, but have not had the opportunity to learn about the bird’s history and the amazing recovery efforts helping to bring the bird back from near extinction,” Brady said.

As biologists and technicians worked through the technical challenges of setting up livestream video camera capabilities in early 2015, educators from the Santa Barbara Zoo worked alongside a team of teachers to build and test curriculum components that would combine the livestreaming technology with project-based experiential learning covering biology, history, geography, and conservation.

Aaron Marshall, director of education for the Santa Barbara Zoo, played an instrumental role in the development of the curriculum. “This has been an exciting and collaborative project, a true team effort involving individuals across multiple disciples and organizations, and that’s a big reason why the program has been such a success,” Marshall said.

During the development stage, third through sixth graders and their teachers from Fillmore Unified School District participated in year-long activities to learn about California condor recovery and the principles of wildlife management.

Fillmore Middle School teacher Laurie Merrill shares her experience about the opportunity to be part of the development of the CondorKids program: “This program helps my students make a meaningful connection to one of the most endangered animals on earth – a species that lives in their backyards. By seeing these condors in the wild, they are inspired to learn and do more for condor conservation. My students will take these experiences with them for the rest of their lives and one day, may become wildlife biologists, scientists or veterinarians themselves.”

During the summer, students and teachers visited Santa Barbara Zoo to interact with biologists and conservationists dedicated to California condor recovery. They strapped on climbing gear to ascend the zoo’s climbing wall to experience what it’s like for biologists to repel up and down steep rock faces to monitor California condor nests in the wild. Kids also got an up-close and personal look at two California condors using high magnification spotting scopes, while wildlife biologists demonstrated the use of radio-transmitters which are used to monitor the wild population of California condors.

The culmination of the pilot program – the opportunity for students to travel with wildlife biologists to Hopper Mountain National Wildlife Refuge for the once-in-a-lifetime experience of viewing wild California condors soar on thermal winds above the mountainous terrain.

“Through CondorKids, we have the opportunity to not only teach kids about math and science, but also to build public awareness and foster a conservation ethic,” said Brady.

John Wilber is the principal of Mountain Vista Middle School and has become an advocate for the program in his district. “CondorKids is a marriage between technology, science, environmental stewardship, and experiential learning.”

Wilber and his teachers hosted a special assembly in fall 2015 dedicated to CondorKids, inviting students from neighboring schools, and biologists and staff from the U.S. Fish and Wildlife Service, Santa Barbara Zoo, and other conservation organizations. Students that had participated in the CondorKids pilot program put on a play about the California condor and what the community can do to help them recover.

“We look forward to many more generations of CondorKids. This is just the beginning,” Wilber said.

The CondorKids concept received a big boost in its early development with the financial backing of the Department of the Interior’s Urban Refuge Partnership Program, National Fish and Wildlife Foundation, and additional financial and technical support from the Santa Barbara Zoo, Western Foundation for Vertebrate Zoology, and Cornell Lab of Ornithology.

With additional future funding, the U.S. Fish and Wildlife Service and the Santa Barbara Zoo hope to expand the CondorKids curriculum to additional grade levels.

Ashley Spratt is the public affairs officer for the Ventura Fish and Wildlife Office, Ventura, Calif.

In this video you will see how the U.S. Fish & Wildlife Service partners with the Santa Barbara Zoo and others to help children learn about the California condor through the program "Condor Kids." Visit http://condorkids.net/ for more info. 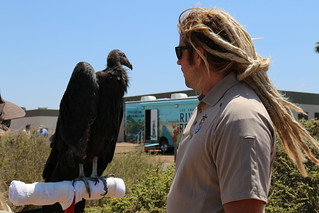 All 27 enrichment lessons are organized with the EQUiP rubric and aligned to NGSS and CC. Lessons cover biology, geography, history, and conservation. Download includes instructions for access to additional free digital resources - images, videos, and assessments - and a web portal with a teacher forum.

This project was generously funded by National Fish and Wildlife Foundation and Urban Wildlife Refuge Partnership and was developed by the Santa Barbara Zoo in partnership with Hopper Mountain National Wildlife Refuge Complex.
Download here!