Endangered salmon, steelhead and sturgeon will soon be safe from the deadly pull of water pumps on the Sacramento River in Yolo County now that a new diversion facility has finished construction.

Located on the western bank of the Sacramento River immediately upstream from the Vietnam Veterans Bridge on Interstate-5, the intake facility is a collaborative effort between Reclamation District 2035 and the Woodland-Davis Clean Water Agency and its partners, including the U. S. Fish and Wildlife Service and the Bureau of Reclamation.

According to Dan Meier, program manager for the U.S. Fish and Wildlife Service’s Anadromous Fish Screen Program, when the facility becomes operational intake pumps will move up to 400 cubic feet per second of water from the Sacramento River -- the equivalent to filling an Olympic-sized swimming pool in less than four minutes.

The new intake consists of ten vertical fish stainless steel screen panels with a brush cleaning system. With very small openings, about a sixteenth of an inch; the high tech fish screens allow species of threatened and endangered fish, including green sturgeon, Chinook salmon and Central Valley steelhead, to swim and spawn in the waterway—while still delivering water to the people and animals that need it.

“The project incorporates the very latest in fish screening design and technology, resulting in the highest levels of fish protection while still reliably providing water to farms, cities and wildlife habitats,” Meier said.

The new intake contains eight modern induction pumps that will move up to 400 cubic feet per second of water from the Sacramento River -- the equivalent to filling an Olympic-sized swimming pool in less than four minutes. Credit: Jon Myatt/USFWS

At a projected cost of almost $57 million, the fish screen facility is replacing the unscreened intake constructed in 1920, with a new joint intake serving Yolo County water users. Project construction was initiated in August 2014.

Project manager Glenn Vita stands next to one of eight
computer-controlled pumps. which will be "a significiant
improvement over the old, manually operated pumps,"
he said. Credit: Jon Myatt/USFWS

The project represents a successful collaborative effort to improve fish passage on Sacramento River, combining the newest technology in fish screen and diversion facility design that will eliminate fish entrainment.

“Not only will the new diversion help protect against entrainment of critical fish species, but will provide for a more reliable and better quality water supply for the cities of Woodland and Davis,” he said.

The intake will draw water to irrigate 15,000 acres of farmland in eastern Yolo County and also directly to a water treatment facility that supplies water to Davis and Woodland as part of the surface water project.

Glenn Vita looks at one of the 100-year-old induction pumps. Until today (September 13, 2016), these 100-year pumps were still operational. Credit: Jon Myatt/USFWS

The project will supply 30 million gallons a day of treated river water to the two cities – 18 million to Woodland, 12 million gallons to Davis – to supplement both cities’ groundwater.

The structure is jointly owned and operated by Reclamation District 2035 and Woodland-Davis Clean Water Agency.

Reclamation District 2035 encompasses nearly 20,000 acres east of the City of Woodland, including land in the Yolo Bypass, and provides water for crop irrigation and habitat preservation. Woodland-Davis Clean Water Agency provides surface water supplies to the Cities of Davis and Woodland, and the University of California at Davis.

Funding for the intake and fish screen was provided by federal and state agencies and Woodland-Davis Clean Water Agency, of which roughly 35 percent was provided through the Anadromous Fish Screen Program, a federal program jointly implemented by the U. S. Fish and Wildlife Service and Bureau of Reclamation through the Central Valley Project Improvement Act.

Check out more photos of the facility on our Flickr album below... 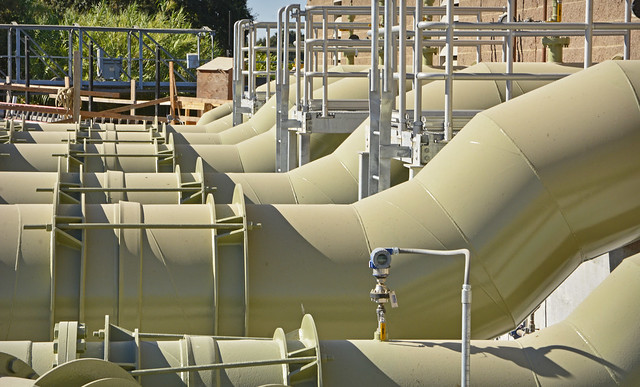 Jon Myatt is the digital communications manager for the Pacific Southwest Region, located in Sacramento, California.