Before the fur trade of the 18th and 19th centuries, sea otters ranged along the North Pacific Rim from Hokkaido, Japan to Baja California, Mexico. Sea otters most closely resembling today’s southern sea otters occupied the southernmost portion of that range—from at least as far north as Oregon to the species’ southern limit at Punta Abreojos, Baja California. Today southern sea otters have reclaimed about 13 percent of their historic range: the mainland coastline from San Mateo County to Santa Barbara County, California, and San Nicolas Island, Ventura County (as a result of translocation efforts initiated in 1987). Sea otter counts are conducted annually by the U.S. Geological Survey. The latest census and stranding information is available at www.werc.usgs.gov/seaottercount.

Southern sea otters are among the smallest of marine mammals, with adult females and males averaging 46 and 64 pounds, respectively. Unlike most other marine mammals, they have little subcutaneous fat, relying instead on their clean, dense, water resistant fur for insulation against the cold. Contamination of their fur by oily substances can destroy its insulating properties and lead to hypothermia and death. Sea otters also maintain a high level of internal heat production to compensate for their lack of blubber. As a result, their energetic requirements are high, and they consume an amount of food equivalent to about 25 percent of their body mass per day. Depending on factors such as habitat, sex, reproductive status, and per-capita prey availability, obtaining this quantity of food requires that sea otters spend 20-50 percent of the day foraging.

Mating and pupping occur throughout the year, but on average across the range, a peak period of pupping occurs from October to January, with a secondary peak in March and April. Females typically give birth to a single pup, with care provided solely by the pup’s mother for the approximately 6 months until weaning. Pup rearing and provisioning impose high energetic costs on females, requiring them to increase foraging effort during this period and leaving them highly susceptible to stressors they may encounter when they come into estrous after weaning, such as infections and aggression by males. 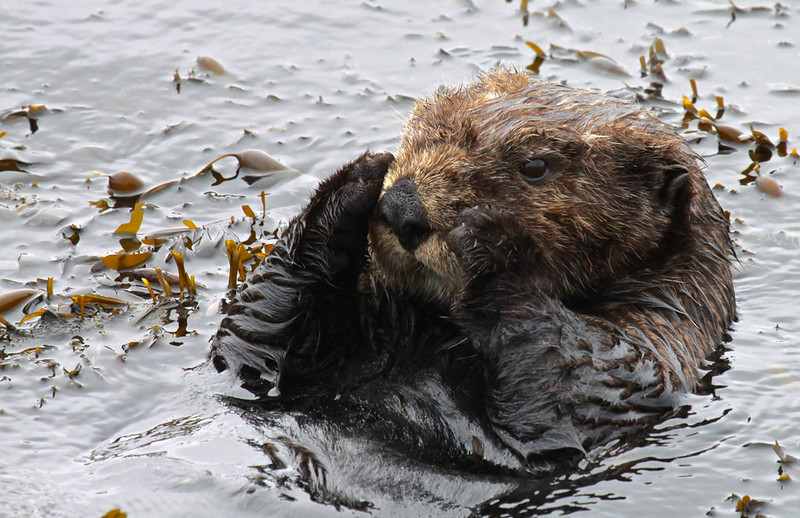 Because of their consumption of large quantities of marine invertebrates, sea otters play a significant role in nearshore marine ecosystems of the North Pacific Ocean, enhancing not only kelp forests but also seagrass beds. Sea otters are generally considered to be a keystone species in these communities. Keystone species are organisms that have large-scale community effects disproportionate to their abundance. Kelp forests provide numerous direct and indirect benefits, including habitat for hundreds of invertebrate and fish species, reductions in coastal erosion, and carbon storage that can moderate climate change. Seagrasses also provide important benefits, such as nursery habitat for many other species, shoreline protection, and carbon sequestration.

The primary factors limiting population growth and range expansion of southern sea otters in recent years have been density-dependent resource limitation (where the number of sea otters is in equilibrium with available prey) in much of the central portion of the mainland range and white shark attacks in the northern and southern portions of the mainland range. The very recent (2015-2016) increase in sea otter numbers in the center of the range may be due to an increase in sea urchin abundance resulting in part from the near-total loss of sea stars, an important predator of sea urchins, from the Pacific coast due to wasting disease. The body condition of sea otters in areas of the range with low per-capita prey availability strongly influences their susceptibility to additional stressors. These stressors include biotoxins produced during harmful algal or cyanobacterial blooms, disease-causing pathogens such as the protozoal parasites Toxoplasma gondii and Sarcocystis neurona, and acanthocephalan parasites. Other threats to southern sea otters include entrapment or entanglement in fishing gear, oil spills, and climate change.

Range expansion is key to southern sea otter recovery and to the restoration of ecosystems in which sea otters were once the keystone species. The translocation program allowed the reintroduction of sea otters to San Nicolas Island but also required the removal of sea otters from a “no-otter” management zone. An extensive review of the translocation program was completed in 2012, resulting in termination of the program. For southern sea otters to be considered for delisting under the Endangered Species Act, the population index would have to exceed 3,090 for three consecutive years, according to the Southern Sea Otter Recovery Plan. The population index exceeded 3,090 for the first time in 2016. The Marine Mammal Protection Act states that marine mammal stocks “should not be permitted to diminish beyond the point at which they cease to be a significant functioning element in the ecosystem of which they are a part.” For southern sea otters, this likely means that the population would have to exceed 8,400 animals in California alone. The ultimate goal of southern sea otter recovery is to reestablish ecological relationships in the ecosystems where sea otters and other nearshore species coevolved.

If you have any questions regarding the southern sea otter, please contact:

Summary of comments received on final SEIS and Proposed Rule